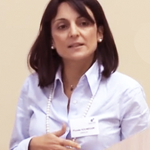 Professor Dr. Phoebe Koundouri holds a PhD (2000), MSc (1996) and MPhil (1995) in Economics from the University of Cambridge (UK). She is Professor in Economic and Econometric Theory and Applications (with special emphasis on Natural Resources, Energy and the Environment) at the School of Economics, Athens University of Economics and Business (Greece). She is also Founder and Scientific Director of the Research Laboratory: ReSEES: Research on Socio-Economic and Environmental Sustainability at the same University and Chair of the Scientific Board of the International Center for Research on the Economy and the Environment (ICRE8, www.icre8,eu). She is a Visiting Professor at the Centre for Climate Change Economics and Policy, London School of Economics (UK) and an affiliated Professor at the ATHENA Research and Innovation Center, where she directs the Greek Climate KIC. She is the Vice-Chair of the scientific advisory board of the European Forest Institute. Professor Phoebe Koundouri is also the co-chair of the United Nations Sustainable Development Network - Greece, which is hosted at ICRE8 and the Political Economy of Sustainable Development Laboratory (PESD, pesd.econ.uoa.gr) of the National and Kapodistrian University of Athens on the Political Economy of Sustainable Development.

She has published 15 edited books and monographs, and hundreds of scientific papers. She is a highly cited academic author ranked in the top 1% of all female economists in the world. She is co-editor of the official journal of the European Association of Environmental and Resource Economists, associate editor and editorial board member in 25 academic journals. She was elected Council Member (2012-2015) and Vice President of the European Association of Environmental and Resource Economists (2014-2015). In the past she held fixed-term and tenure track academic positions at the University of Cambridge, University College London, University of Reading, and many visiting positions worldwide. She is an advisor to the European Commission, World Bank, OECD, UN, NATO, WHO, numerous national and international foundations and organizations, as well as governments. Since 1996, she has coordinated hundreds of research projects on natural resources management issues, while together with her team have attracted millions in competitive research funding. She has organized numerous prestigious international conferences and supervised many PhD students.

Central to Koundouri’s research is the concept of the ‘total economic value of public goods’ and in particular the value humans derive from natural resources and their ecosystem services. Her main research goal is to refine the theoretical models and empirical methods used in the field of natural resource, ecological & agricultural economics, towards: (a) better understanding of the concept and determinants of the total economic value of ecosystem goods and services, (b) more accurate modelling of this value, (c) more robust estimation of this value, (d) more efficient integration of this value in interdisciplinary resource management and policy-making. Areas of research as per EconLit: Environmental, Natural Resources and Agricultural Economics and Econometrics; Economic Sustainability, Cost-Benefit Analysis and Discounting; Non-market Valuation; Agricultural Economics and Finance; Interdisciplinary Approaches to Natural Resources Management and Policy; Econometric Methods; Philosophy of science.

Professor Koundouri and her large interdisciplinary team of researchers has produced research and policy results that have shaped European and International policies with regards to integrated and holistic management of the interaction of nature and people. Over the last two decades, Phoebe Koundouri has given keynote and public lecturers all over the world, and received scholarships and prizes for academic excellence from various academic institutions and associations.